Dr. Kiran Santlal is a Registrar in Psychiatry. He previously worked in the HSE National Drug Treatment Centre from 2014 – 2021, where he worked closely with Dr. Eamon Keenan and Dr. Fiona Fenton to develop and promote The Club Drugs Clinic Ireland. This outpatient-based clinic focused on detoxification programmes for Gamma Hydroxybutyrate (GHB) and/or Gamma Butyrolactone (GBL).

Dr. Santlal has presented on chemsex at national and international conferences, and has embarked on postgraduate research on this topic.

Chemsex refers to the intentional consumption of specific substances in a sexual context, for the purpose of prolonging and enhancing the sexual experience.  The drugs most commonly used in Chemsex are Gamma Hydroxybutyrate/Gamma Butyrolactone (GHB / GBT) cocaine or crack cocaine, and crystal methamphetamine – both of which are highly addictive drugs. Problematic chemsex, and resulting substance dependence has shown up in presentations to Emergency Departments, Sexual Health Clinics, and General Practitioner Clinics.

Chemsex parties, which can sometimes last for 72 hours or longer, can lead to participants obtaining HIV post-exposure prophylaxis medications too late, or forgetting to take their HIV pre-exposure prophylactic medications (PrEP). Dependence on the substances consumed has resulted in episodes of overdose admissions to the Intensive Care Units. Withdrawals from these drugs could progress from mild (anxiety, tremors) to severe (muscle breakdown, rhabdomyolysis, seizures) within one hour if inadequately treated.

Gamma Hydroxybutyrate (GHB) is a naturally occurring neurochemical that is found in the brain and other areas of the body. Gamma Butyrolactone (GBL) on the other hand is a synthetically produced solvent which has industrial uses such as cleaning printer heads and stain removal. When ingested, GBL is converted into GHB which is further metabolised into carbon dioxide and water and is not detectable in a body sample (urine or blood) after approximately 12 hours. This is one of the reasons it is difficult to ascertain whether someone had ingested it, if they present to the Emergency Department, as the signs of a “G” overdose are similar to those of an opioid overdose. 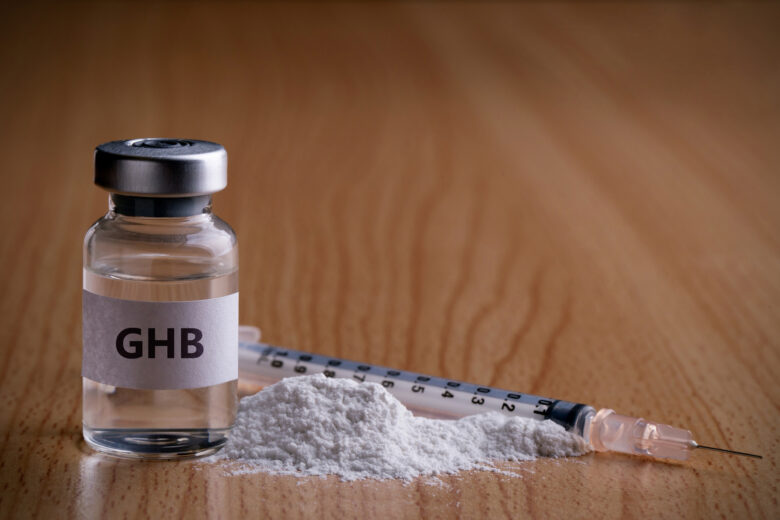 Further complicating the scenario of this particular substance is that it is a Schedule 3 controlled drug, meaning the likes of Ketamine or Flunitrazepam (Rohypnol), while there is a high risk of dependence, in smaller quantities it has therapeutic purposes. GHB has been prescribed internationally. In continental Europe it is used to manage alcohol dependence and is distributed in the United States under the brand name Xyrem, to manage narcolepsy. Because of its industrial uses, it can still be imported into Ireland in large quantities, by ordering online.

When consumed, the dose of G needed to produce a euphoric, “drunken-like” effect for approximately 3-4 hours is very small- just 1 millilitre. However, the difference between the desired effect and losing consciousness from an overdose is just a fraction of a millilitre. G acts as a depressant with similar effects to Benzodiazepines and alcohol, which is why consuming this substance with alcohol increases the risk of losing consciousness or “going under.”

Crystal meth and cocaine are relatively well known in the substance use arena, however their consumption in a party scenario has led to the evolution of chemsex to “slamsex”, meaning the progression from ingesting these drugs, to injecting them. The use of  “party drugs” has also resulted in different terminologies being utilised in order to distance a chemsex participant from the label of “addiction.” For example, in the slamsex context, injecting needles are described as “pins” and and “slamming” is said instead of “injecting.”

Nevertheless, despite this dissociation from other substance-injecting populations such as people using opioids, there was concern about the fact that the “slamming party participants” formed a cohort of novel injectors who had no experience with using needles. Due to the stigma associated with injecting substances, few sought or received harm reduction education on proper injecting techniques, as Ireland’s opioid-using population would have. This inevitably led to the appearance of problems that would have been the remit of injecting opioids, like sharing needles or physical complications like abscesses.

Chemsex itself is an amalgamation of various biological, psychological and social factors and also affects the bio-psycho-social elements of a person’s life. The changing geography of the party scene approximately 10 years ago and the rise in technology has strongly influenced one’s ability to access both parties and substances. While many participants may engage in chemsex without experiencing the negative aspects of it, the practice carries the risk of becoming problematic due to a number of external impacts.

Even though chemsex is disproportionately represented in homosexual population, it is also present within the heterosexual population. The initial attraction to chemsex is due to the sense of sexual freedom, disinhibition, and better and longer sex that taking substances during or after sex can result in. This is also coupled with the realisation that the chemsex participant is part of a community. Eventually, however, participants may find that they are consuming the not only for sexual encounters but also for self-medicating purposes.

Adverse childhood events, HIV stigma, sexual shame, fear of rejection, and gay history (“queerstory”) have underlying roles in influencing chemsex practises. One driving factor that perpetuates engagement in chemsex parties and practises appears to be experiences of loneliness and isolation, fuelling a search for intimacy by going on social media and “hook up” apps. This then leads to the development of sexual connections involving drugs and alcohol which further evolves into a strong association between substance use and sex. The relationship between the two typically results in the formation of a unique “identity” where one cannot have sex without drugs.

The Club Drugs Clinic Ireland was primarily created to manage detoxification programmes for people who were dependent on GHB/GBL as this was a relatively new substance appearing on the drug scene at the time, and the dosages of medications prescribed were more than many clinicians felt comfortable prescribing, especially on an outpatient basis. The programme itself has evolved over the last few years and become refined to a 12 day medication detoxification, linking in with external supports and internal psychological and social support, as well as follow up in the weeks and months after the medication prescription has ceased.

The importance of ongoing follow up planning is highlighted by the the fact that the highest risk of relapse is within one week of completing the detoxification programme. The most common reasons for relapsing include not being able to cope with either residual withdrawal symptom of anxiety and/or depressed mood, or having a comorbid mood disorder which was being medicated with the drugs, relapsing onto alcohol (where up to 2 litres of spirits per day could be consumed), not being able to cope with the feeling of loneliness and emptiness, or being unable to have sex without consuming substances. These factors would need to be kept in mind when managing problematic chemsex.

The Club Drugs Clinic Ireland is a member of the Chemsex Working Group Ireland. This is a multi-sectoral collaboration of statutory and non-governmental organisations that was established in 2015 to address the harms associated with chemsex practices. The main focus of this group has been harm reduction campaigns on GHB/GBL, Crystal Meth, and other substances consumed in chemsex. The harm reduction resources that have been developed include the “G Card” and the “G Poster.”

Further research is needed to continue monitoring and treating mental health, sexual health, consent, and health promotion messaging. In order to engage the chemsex practicing population a non-judgemental and culturally sensitive approach would need to be adopted by members of staff involved in this evolving healthcare service.

Competently managing problematic chemsex is challenging because it is a combination of issues involving substance misuse, sexual health, and mental health. Chemsex and drug-related interventions would need to be adapted to ensure high risk behaviours are addressed, and treatment goals relevant to sexual health and mental health are included. The number of referrals to The Club Drugs Clinic Ireland continues to increase, indicative of an ongoing need for a streamlined referral pathway amongst the various healthcare services.

Referral Forms for The Club Drugs Clinic Ireland can be accessed HERE.